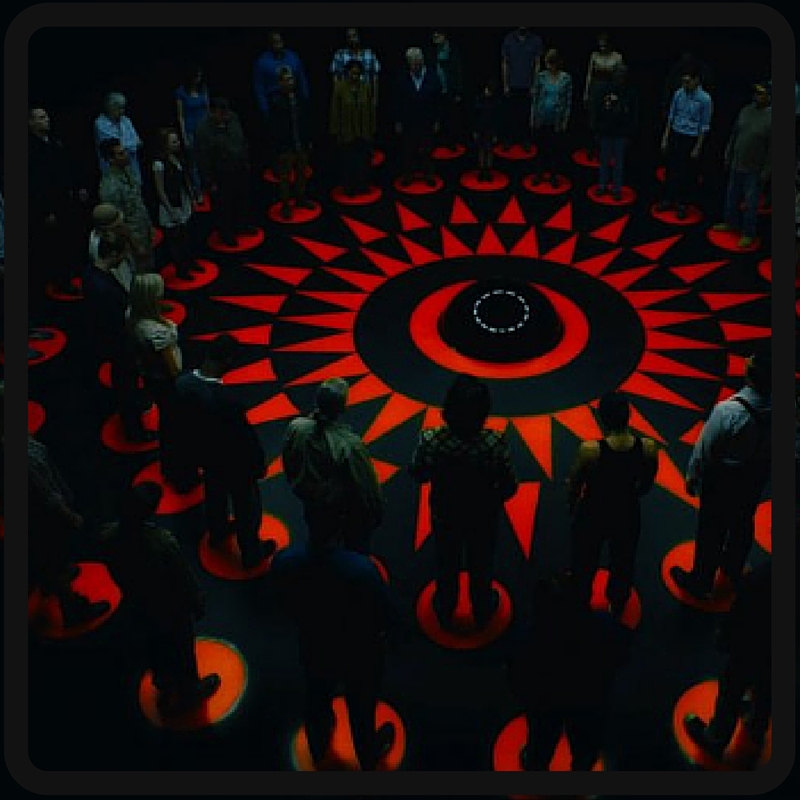 Circle begins with 50 people waking up to find themselves in a dark room standing on illuminated red circles within a bigger circle. It instantly becomes apparent that moving from their designated circle, or touching any other person will result in a bolt of energy killing them. They begin discussing the situation when a droning sound is heard and someone is randomly shot with a bolt. They soon learn that this happens every 2 minutes. What also becomes apparent is that with hand gestures, they themselves are choosing who dies by way of a vote.

After recalling their last memories they conclude that alien ships had sucked them aboard and are now forcing them to decide who the “winner” will be. This brings up some fascinating issues regarding race, religion, pornography, sexuality and criminality. Everyone’s bigotry and prejudice surfaces when they are faced with a bolt of energy ending their life it would seem. The hardest choice they face is between two people stood next to each other in the circle; a little girl and a pregnant woman. Most agree that it should come down to the two of them but cannot decide which one to save. Some of the people are intent on saving their own lives however and form alliances in order to vote off key individuals whom they disagree with.

The film is fascinating albeit low budget, however the ending left more questions than answers and I felt frustrated. A disturbing memory of the film lingered in my mind that night which is usually a good sign, but I would love a sequel just to answer the key question: Why would aliens even do this?

If aliens interest you, I’ll soon begin writing a Science Fiction novel. I’ll update you when the book is released with details of how to get a copy. Just join my mailing list HERE and I’ll email you when it is released. 🙂