[Don’t read these if you are easily offended] 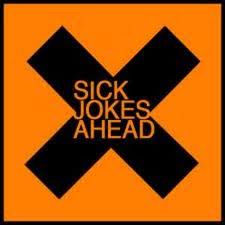 What do you get if you put a baby in a blender?  Well I don’t know what you get but I get an erection.

Did you hear about the deaf and dumb girl who got raped?  Her attacker broke her fingers so she couldn’t tell anyone.

Mum walked into the bathroom one day & found young Johnny furiously scrubbing his penis with a toothbrush and toothpaste. “What the hell do you think you’re doing, young man!” she exclaimed. “Don’t try to stop me!” Johnny warned. “I’m gonna do this three times a day, because there’s no way I’m gonna get a cavity that looks and smells as bad as my sister’s.”

Q: What’s 12 inches long and hangs in front of an arsehole?  A: Tony Blair’s tie

Why was TJ Hooker’s wife covered in poo? cos William Shatner!

A Welsh farmer walks into his farmhouse kitchen carrying a sheep under his arm.  His wife is preparing lunch. ‘This is the pig I have sex with when I want a bit of a change’ says the farmer.’What are you talking about? That’s a sheep, not a pig’ says his wife.  ‘I was talking to the sheep’ he replies.

I was in the pub the other day when someone told me this: What do you do you do if your nan has a fit in the bath?  Chuck in some detergent and your dirty laundry.  At which point someone leaned over and said,  “How dare you say that?  I’ll have you know that my nan died like that.” “She choked on a sock”

There’s a paedophile says to this little boy “If I give you 20 quid will you come in my car?” The boy says “For 20 quid I’ll come in your mouth!”

Three Vampires go into a bar.  First one orders a blood.  Second one orders a double-blood.  Third one orders water.  The other two ask him what he’s doing.  The third vampire then produces a tampon from his pocket and replies, “I’m making tea.”

What’s the definition of the bravest man in the world??  The man who comes home drunk, covered in lipstick and smelling of perfume, then slaps his wife on the backside and says: “You’re next, fatty.”

Two Nuns are getting raped in the park.  The first nun says “Forgive them father for they not know what they are doing”.  The Second nun replies ” Jesus Christ, this fucker does”

Never shag a dwarf with learning difficulties, it’s not big and it’s not clever …….